March 2018, I finally attended my first Indian wedding after missing a few invites. A traditional Indian wedding can last up to a week. Guests might be invited to all or some of the celebrations. According to the budgets, communities and states of the families, rituals will vary but there are some recognizable patterns.

Here is a little guide drawn from the two weddings I attended in Lucknow and Ahmedabad.

Two or three days before the ceremony, the families often throw the engagement party.

On the eve of the wedding, the two families celebrate separately :

The day of the wedding

On the day, festivities start with a few prayers and the groom’s procession (baraat). Friends and family dance while approaching the venue to the sound of a band. The groom can decide to arrive on a horse, an elephant or soberly in a car.

Then the family of the bride welcomes him, he sits down and waits for his betrothed. After she makes her entrance, they each put a flower garland around the other one’s necks. 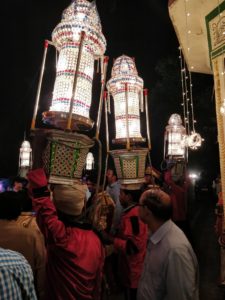 Close friends and relatives attend this part. The future spouses sit under the mandap with the pandit (“priest”). The rituals involve rice, water, rupees and prayers. As it lasts for a few hours, guests come and go around the couple.

The union is sealed by

During the ceremony, the bride’s family tries to steal the groom’s shoes who took them out. The groom’s relatives hide and protect them. If the theft does take place, intense negotiations happen to get them back. 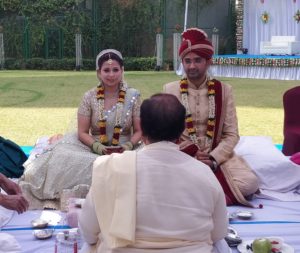 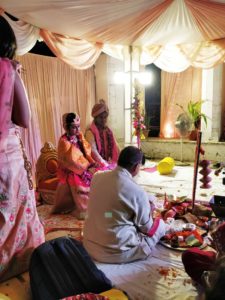 Later, it is reception time. A few hundred people are usually expected to attend. Sometimes even people who do not know either of the spouses show up : friends of families, remote families of guests; they come, they eat and they leave.

The newlyweds change their clothes and stand on a well-lit stage. Guests come to have their pictures taken with them. Gifts and envelops are handed out to the families and the couple touches the feet of their elders as a sign of respect.

What to wear at an Indian wedding

It has happened. You have just been invited to an Indian wedding. But what to wear ?

First of all, if you decide to wear Western clothes, you will not offend anyone. Traditionally guests avoid black and white, associated to mourning, but you will see more and more people taking liberties, again there is not much wrong you can do. Don’t hesitate to wear bright colors.

For men, a formal suit is popular especially for the reception. Alternatives are the kurta (tunique) or the vest.

For women, if you want to venture into Indian fashion (and you should, it’s a lot of fun), here are the most popular options : 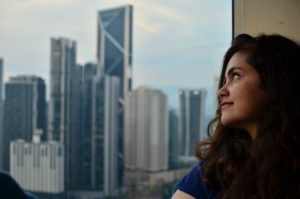